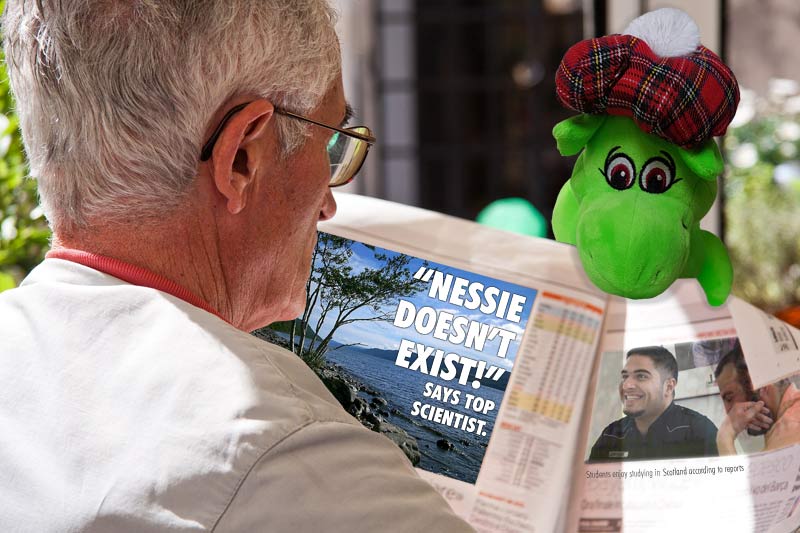 Do you think the Loch Ness Monster actually exists? In our last two blogs we provided some weblinks that suggest she might, but there are, of course, others who think that she is just a myth, kept going to help the tourist industry in northern Scotland.

Certainly, one of the most powerful arguments against Nessie existing is that we should found her by now. Although there are lots of people who have seen something, there is not any definitive sighting or photograph that conclusively proves she exists. However, it’s well known that humans have not discovered every creature that exists and that many of those still to be discovered live in the depth of the oceans. Loch Ness, while very deep, is hardly an ocean though.

A major scientific investigation in 2003, conducted by the BBC, could find no trace whatsoever of the Monster and concluded that “the only explanation for the persistence of the myth of the monster is that people see what they want to see.” A more recent report, on the website, thescienceexplorer, was not quite so certain, with its author saying that while she “would prefer it that Nessie be real … she probably doesn’t exist.”

However, we have news for all the scientists. Nessie is alive and well and has just joined Scottie and Bonnie, our other mascots, to add to the School’s marketing team. She’ll be making regular appearances in the future and accompanying Andrew Lennox, the School’s President, on his travels around the world to see students and agents. It just goes to show how little scientists know!