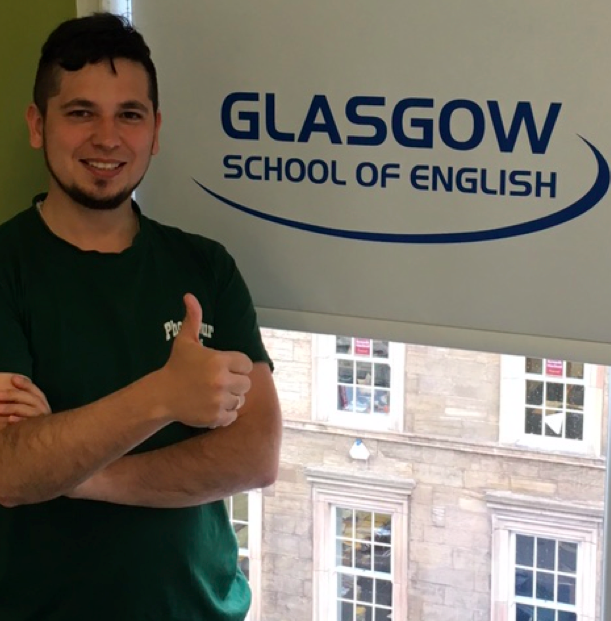 Sergei Koliaskin won a British Council competition to come to Glasgow School to improve his English language skills. He is from Chelyabinsk in the Ural Mountain region of Russia and he has been studying at Glasgow School of English for two weeks.  He kindly agreed to meet me recently to talk about his experience at the School and in Scotland.

We discussed what Russian people know about Scotland.  He said that one of his friends is studying Celtic history and I was amazed when he showed me photographs taken at a dancing school in Chelyabinsk with Russian girls dressed in Scottish tartan and about to enjoy some Scottish dancing!

Sergei told me that this is the first time he has visited Scotland.  He says, “Scotland is a nice place.  Glasgow is a wonderful city with a lot of green places – many nice parks and public spaces  – and the people are very friendly.

“The teachers are good and the lessons are interesting.  They give you more confidence in speaking and my English has improved. One other good thing is that there are people from all over the world studying here and you get to meet them and learn about their countries.  It’s good to learn about different cultures.”

The M8 motorway connects Scotland’s two largest cities, Glasgow and Edinburgh. When you come to study here at Glasgow School of English, we often have an official trip to visit Edinburgh, but you can easily go on your own: it only takes about 50 minutes in a train.

As well as being an ancient city, Edinburgh is home to lots of fascinating places, people and things. One of the most interesting of these is what is probably the only penguin in the world that has been knighted (given the rank “Sir”) by a king.

This penguin lives at Edinburgh Zoo. The zoo is very big and is a really interesting place and well worth a visit if you go to Edinburgh. Their penguin enclosure is amazing, with a huge glass wall where you can see the penguins swimming under the water.

One of these penguins is the Colonel-in-chief and mascot of the Norwegian Royal Guard. When he was knighted in 2008, he was also given the name Sir Nils Olav. After the ceremony when he was knighted he then “inspected” the guard of soldiers who attended the ceremony. When the Norwegian Royal Guard soldiers visit Edinburgh, as they sometimes do for the Edinburgh International Festival, they always pay Sir Nils a visit!