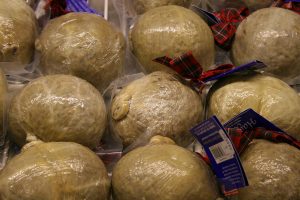 Most people who come to study at Glasgow School of English know that haggis is the one food for which Scotland is most famous. For those who don’t know, a haggis (several haggis are pictured here) is a sort-of sausage, a minced mixture of sheep heart, lung, oatmeal and seasoning wrapped in a sheep’s stomach. It’s definitely not suitable for vegetarians, but for those who do eat meat it is very tasty indeed. However, not many of our students know that we do other things as well as eat it!

Haggis hurling is exactly what it sounds like – hurling (throwing) a haggis. Although it has been claimed to be an ancient ‘sport’, in reality it is a modern invention, going back to the 1970s when an advert was placed in a newspaper at the time of the Gathering of the Clans (historic family groups under the same name, such as the Clan MacLeod or the Clan Campbell) in Edinburgh. This advert announced a ‘revival’ of the ancient Scottish sport of haggis hurling. The intention was simply to see who can throw a haggis the furthest.

Nowadays, there is even a World Haggis Hurling Championship, with all the money earned going to charity. The ‘sport’ has strict rules: the haggis must be cooked and of a specific weight; it must be inspected to make sure it is a proper haggis, with all the traditional ingredients; and when it has been thrown it must remain intact when it lands.

The most recent annual competition took place in Ayrshire, south of Glasgow, at the place where Scotland’s national poet, Robert Burns, was born. This year it was in January and a new world record was set, as you can see in this YouTube video. Haggis hurling has become famous in different countries, with Canada and Australia also holding competitions. Even if you don’t manage to see haggis hurling competition taking place when you are studying in Scotland, you should (unless you are a vegetarian or vegan), try to eat it at least once when you are here!