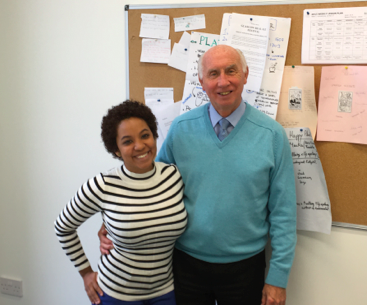 Anabella Chavez (seen here with Andrew Lennox, the President of the school) works for ESL, a major international agency in the world of English language teaching. She is based in Panama but recently came to Scotland for the first time, where she is studying for a few weeks at Glasgow School of English. Given her industry background, it was interesting to meet up with her and find out what she thinks about Scotland in general and the school in particular.

She began by telling me that she knew about our country through her job, as ESL send students to study here. She is particularly interested in our history and in seeing our landscapes. The romantic image of the Highlands, with their famously beautiful scenery, is something she wanted to see for herself.

When asked about her first impressions of Scotland, she said that, coming from Panama, there were two things that really stood out. Firstly, and most importantly, “It’s lovely to be able to walk almost anywhere and feel safe. Sadly, that’s not always possible in my own country.” Secondly, she noted that the weather was very different from home, saying that it was very hot in Panama while it was cool and wet here, and it took her a few days to get used to the Scottish climate.

As someone who has to make critical decisions about English language schools in her job, Anabella has found that Glasgow School of English is a very good one. She says the teachers are excellent and they prepare very well for each class. She explained that they go around the class and help each student individually and, rather than just telling you what to do all the time, they ask you to think about what you’re saying and try to work out the answers yourself, which she thinks is good way to learn and understand a language. Finally, she said that the other students are very friendly and it’s great to meet people from all over the world.

We discussed studying and living in Glasgow and, again, she said the fact that it’s so safe to walk around in has made the biggest impression on her. She had been told that Scotland was friendly before she arrived, but she has been really impressed by just how nice everyone is. Anabella’s English is very good and it helps that, as she said, “I’m not frightened of trying to speak English so I am happy to ask questions. Here, in Glasgow, people will help you or speak to you, even if they’ve not met you before.”

Finally, she said she would love to come back to Scotland again, perhaps to work here for a short time. Anabella finished our chat by saying, “I really do love the country and the people. It has been a great experience.”