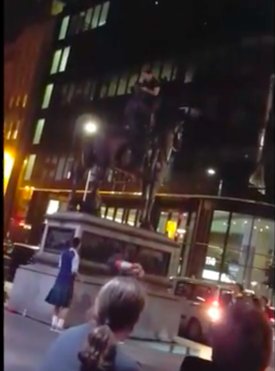 Glasgow, like all very old cities, has quite a few statues in its public squares and other places. However, while most Glaswegians probably can’t name many, if any, of the statues in George Square (the main square in front of the City Chambers – the magnificent Council [local government] offices), just about everyone knows the statue of the Duke of Wellington (the famous British soldier, politician and Prime Minister) seated on his horse, in Royal Exchange Square.

The statue of the Duke is in front of the Gallery of Modern Art. When you come to study at Glasgow School of English, you will have the opportunity to go to see the modern art in this Gallery and when you do make sure you have a look at this statue.

The reason why everyone in Glasgow knows this statue is because it has, for many years, had a traffic cone on the head of the Duke. Originally put there as a joke, it’s now regarded as an essential part of the statue and if it’s ever removed then it’s soon replaced.

A few years ago, the Council decided that they would raise the plinth (the block on which the statue sits) a few feet so that no-one would be able to get the cone back on the Duke’s head. The Glaswegians were not pleased and the Council changed its mind! However, as this video shows, it’s not easy to get the cone up there!